“Musha ring dumb a do dumb a da

Whack for my daddy-o,

Whack for my daddy-o

There’s whiskey in the jar-o”

Phil Lynott, the late lead singer of Irish rock band Thin Lizzy (pronounced Tin Lizzy in the Irish accent), is still revered in his native Dublin, Ireland. In fact, he is immortalized in a bronze statue that sits just outside Bruxelles Pub in downtown Dublin. The statue, much like the man it commemorates, is iconic and thus makes for a great meeting place. That’s where we met Gareth Downey of Dublin Whiskey Experience. Dublin Whiskey Experience is a tour company that hosts whiskey tastings at several known and not-so-known pubs around Dublin. Gareth, tall, handsome, and quiet, is an Irishman with family ties in the Irish whiskey business.  He is also an excellent guide and knows his Irish whiskey. From Bruxelles Pub we walked to the Stag's Head, a gorgeous Victorian-era pub with a mahogany bar capped with red Connemara marble. We plunked down in a back room just off the bar where we sampled Bushmill’s Black Bush and Kilbeggan 12 while Gareth relayed tasting notes and interesting facts about Stag’s Head (James Joyce used to frequent the pub regularly). After leaving the Stag's Head, our group of three made our way to the Long Hall Pub. We were not prepared for what we saw when we entered. Through the front door, the Long Hall Pub is long and narrow like, wait for it, a hall. To the right side of the room sits one of the most exquisitely beautiful bars in the world. This functional work of art stretches near the entirety of the pub and is surrounded by stained glass, mirrors, and enough Irish whiskey to make a Dubliner forget all about Molly Malone. The walls are all wood paneled, decorated with years of memorabilia. The carpet is a rustic red with gold pattern flourishes. The lights are dim, but not too dark, lending the place a relaxed and classy vibe. We sampled a few more whiskeys here, but the star of the show at the Long Hall is the Guinness. This pub is renowned for its scoops of the black stuff, and its legend is real. A pint of Guinness here is more mythical elixir than plain stout…words do not do it justice. After engaging in fine craic with Gareth and learning more about him, his family, and Dublin we headed to a barber shop. The entrance to the Market Bar is located behind a secret door at the back of a Dublin barbershop, Speakeasy style. One can get buzzed in this establishment without even getting a haircut. At the Market Bar, we tried Redbreast 12 (Amanda's favorite), Method and Madness (Drew's favorite) and Connemara 12 (a Scotch drinker's favorite). Gareth, ever the amiable host, regaled us with stories of Dublin's past and provided interesting tidbits about the whiskey we were drinking. As our tour concluded, we all wished each other well and went our separate ways, a little better for having to get to know each other a bit and pouring drams together. The Emerald Isle is a surreal place with landscapes seemingly ripped from a dream. Her people are friendly folk who have blessed the world with fine whiskey that displays their own warm character. Whenever you’re in Dublin, take a tour with Dublin Whiskey Experience and tell Gareth that Drew and Amanda sent you. 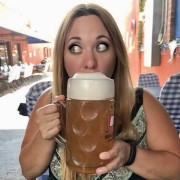