Remember that feeling of going to summer camp as a kid?

Whether you were away a week, two weeks or a month, sleep away camp or daily camp, summer camp was a time for you to meet new friends and have fun.

Flash forward to our long tiring days of adulting, wouldn’t it be great to go to camp again? To have the opportunity to not think about work for a week, meet new people, take part in some fun activities, and of course, drink bourbon.

If this is something that sounds good to you then The Kentucky Bourbon Affair is exactly what you need! There’s no other place where you get to experience behind the scenes tours, exclusive tastings and of course, have one on one experiences with the Master Distillers themselves!

For the past two years, I have been hearing great things about The Kentucky Bourbon Affair. People come from all over the country to spend a week with bourbon connoisseurs, master distillers or just other bourbon enthusiasts. Being that the was the third year, I thought I ought to make it a point and see what all the hype was and if this truly was a bourbon “fantasy camp”. My first activity started early Tuesday morning when myself and 14 others were shuttled off to spend the morning at the Four Roses Distillery with their new Master Distiller, Brent Elliott. We were able to smell, taste and discuss 9 different bourbon barrels consisting of 9 different Four Roses recipes. The goal here was for all of us to come to a consensus and select our own barrel that we could individually hand bottle. After a much heated (but friendly) debate, we finally chose barrel #9, it was 9 years & 4 months old, with recipe profile OBSF, Mashbill 60% Corn/ 35% Rye/ 5% Malted Barley, the flavor was mint, fruit, spicy & full body. With Brent’s help, we were each able to bottle our own bourbon straight from the barrel, cork it & label it. This indeed was the best start to the day and it really let me know this was shaping up to be the ultimate bourbon experience.

Later that evening was the official opening & kickoff to the Kentucky Bourbon Affair at Copper & Kings American Brandy Company. Part of nights festivities offered several unique and tasty hand-crafted cocktails from several local craft distilleries, but my highlight was the “Chopped Style” cocktail challenge where we got to watch professional and amateur mixologists compete to create cocktails on the spot with secret ingredients revealed to them only moments before the competition. Wednesday morning began an interesting day as I made my way to the Wild Turkey distillery for lunch & skeet shooting. We arrived at the visitors center where we were greeted by Master Distillers Jimmy & Eddie Russell. Our Wild Turkey experience started with an in-depth distillery tour led by Eddie, where he shared personal stories, behind the scene distillery info and even an occasional family secret . One of my favorite stops was at “Warehouse A”, the oldest rickhouse on the property, where Eddie allowed us to taste a sample straight from the barrel-whoa what a treat! When our tour was complete it was on skeet shooting, super fun, but utterly terrifying for me since this was my first-time skeet shooting – I was so nervous that my eyebrows were sweating! They divided the group into two teams and we each had the opportunity to shoot 10 rounds, I had no idea how good I would be, I actually hit 6 of 10 discs! I’m not going brag too much but I just happened to be on the winning team and went home with a Wild Turkey flask as my prize (we won by 1 point).

We ended our day at Wild Turkey with lunch and of course, a bourbon tasting. Our selections would be “Diamond”, “Master’s Keep”, and most impressive “Decades”. “Decades” will not be released until 2017, it’s a blend of 10-20-year-old bourbons – this was my absolute favorite of the three tastings, what a day!

Wednesday evening was spent at the Louisville Water Tower Park. The Bourbon Women hosted an event called “He Said, She Said” this was billed as a bourbon battle of the sexes with male & female bartenders, chefs serving small plates, and 12 blind bourbon tastings. All men & women participants were given a chip to choose their favorite cocktail, along with 3 numbered worksheets to use during the blind tasting. Once all the votes were tallied, they revealed the lineup. Interestingly, there was a definite difference between the tastes of men & women. The women’s top pick was tied between Pikesville Rye, 110 proof & Four Roses Single Barrel OESK 109 proof, where the men’s favorite was Elijah Craig Small Batch, 94 proof. You can find the rest of the full results from this bourbon battle on the Bourbon Women website.

Thursday evening was dinner with the Russell family. It was a fantastic evening where we spent personal time with Jimmy, his wife Joretta and their son Eddie. The night kicked off with drinks & appetizers out on the 127-year-old Young’s High Bridge, a former railroad bridge that is now used as one of the highest bungee jumping sites in the US. There was no bungee jumping that evening and if there was, I’m not sure if I could have gone through with it. After taking in the beautiful sites we went back to the visitors’ center where we had a lovely dinner with laughing, music, and listened to stories shared by both Jimmy & Eddie, oh and we got to taste any 10 wild turkey products. I had such a fantastic time they had to drag me off the dance floor to get back on the bus. I stumbled into Friday with a full day on tap. We started in Clermont at Jim Beam for some cornhole, bourbon, ham tasting & BBQ with Master Distiller Fred Noe & his son Freddie Noe. He took us to “Warehouse H” to sample 3 different versions of Knob Creek on 3 different floors. The best thing about going to 3 different floors is that you get to experience how the temperature changes effect each barrel. Barrels that age on the upper floors gain proof because water evaporates out at the higher heat and barrels on the lower floor lose proof because moisture finds its way into the barrel. I started on the third floor with Freddie, son of Fred Noe. Our first sample was a 9 year, 129.7 proof Knob Creek, not a bad way to start your morning, I missed grabbing a cup of coffee, but this gave me that hello good morning I needed! This particular bourbon had some heat & spice which paired nicely with the fatty country ham they gave us samples of.

After the 3rd floor, we headed to the 7th floor where we were greeted by Megan Breier, the West Coast Brand Ambassador Jim Beam. She selected our next barrel, an 11 years old & 139.3 proof, that to my surprise, had less heat than the first and was unbelievably smooth. I could have stayed there all day sipping from that barrel!

Our last stop was the 1st floor where we had a 4-year-old 117 proof bourbon served to us by the great Fred Noe. Fred shared some amazing stories and spoke about his time touring with Hank Williams Jr, and even shared stories about the great Booker Noe himself. In fact, as he was sharing his last story about Booker, our sample barrel rolled over and spilled. After rescuing the rest of the bourbon, we collectively joked that Booker probably didn’t want that particular story to be shared.

After jump starting our morning with some bourbon tastings, we headed out for some afternoon BBQ & a cornhole tournament. I’d like to say that my team stuck around in the tournament, but our boards were crazy slippery and we didn’t make past the first round. So we were forced to spend rest of day with bourbon in hand, maybe we threw the game but I’m not telling.

For our Friday night event, we headed to 4th Street Live in Downtown Louisville to the brand new Jim Beam’s Urban Still House, for their Bourbon & Beefsteak bash. This was not a dinner for the faint of heart, this is the ultimate family style dinner, where you share food with people you don’t know, without napkins, utensils and just your hands and an apron! We definitely feasted and drank like royalty, with several different meats, salads, and appetizers, paired with unique bourbon cocktails served to us during each course. After dinner, we got a special treat at the new still house where we had the ultimate opportunity to label & fill our own engraved Jim Beam bottle! Actually, this experience can be had by anyone who frequents the Urban Still House, but let’s keep that our little secret.

Saturday was a day for rest since “Whisky Live” wasn’t happening until later that evening. It’s the first time this event was being held in Louisville and it was the perfect way to conclude the 3rd annual Kentucky Bourbon Affair. Whisky Live is an event held throughout the US. It’s a premier tasting event that offers the opportunity to mingle with industry experts while sampling countless Scotches, Bourbons & Whiskies from around the world. Needless to say, this evening was a ton of fun and of course, there was plenty of whiskey for all! After the fogginess of the night before began to clear, I realized while walking downstairs to the hotel that today was my last day at camp. Bourbon camp was coming to an end and it was time to say goodbye to KY and all of our new friends, but not before a fantastic send-off with brunch & horse racing at Churchill Downs. This was the perfect ending to a wonderful bourbon adventure that I would highly recommend to anyone who, not only loves bourbon but appreciates its rich and complex history. I highly suggest you partake in the Kentucky Bourbon Affair, believe me, you will not be disappointed, it is the ultimate bourbon fantasy camp. 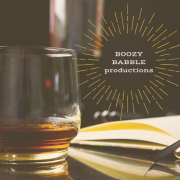 Some of my fondest memories are in the kitchen with my Gram. She spent a lot of time nurturing my naturally curious nature. We spent hours cooking together and as most Italian women, we take great pride in feeding our families. My Gram has since passed, but her famous catch phrase is still with me “A lil’ dab will do ya!" I’ve taken her catchphrase with me throughout my life. Specifically with whiskey in my twenties (haven’t we all). In Jersey, I started drinking the dreaded whiskey and cokes, but my pallet has progressed and now I appreciate all whiskey & bourbons, neat. In fact, I love it so much that I try to incorporate it into my cooking on a steady basis. Hence my blog “A Lil’ Dab Of Bourbon.” My love of all things bourbon continues to progress, and once again I am beginning another chapter. Several months ago, I began my training to be a Whisk(e)y Sommelier and plan to document this journey. Through this journey of flavor profiles, failures and successes I can say that I’ve loved every bit of it! I adore the bourbon community and I love documenting my experiences. I’m excited to share my kitchen adventures with you!