For many of us, chemistry is not a topic of regular conversation or even something we think about while dozing under a hot shower in the morning. It’s true we’ve likely triggered some high school science memories by watching episodes of Breaking Bad, but the fact remains that we are largely insulated from the WHYS and HOWS behind our modern lives.

Science is really the “wizard” behind the curtain.

For example, here is an equation that is integral to our enjoyment as bourbon folk:

But what actually occurs inside that barrel to change the white dog into bourbon?

Do Master Distillers employ a special version of alchemy that is passed down from generation to generation?

The old Stitzel-Weller Distillery used to have a sign on premises that said:

In that time, the science was less understood than today, but nonetheless I’d argue that bourbon making is a wonderful blend of sound chemistry and intrinsic human know-how. But for now, let’s get back to that clear liquor sitting in a barrel….

Essentially, and I’m over simplifying this here,  the aging process can be broken down as follows:

The organic chemicals from the wood are what give bourbon its identity and provide for the different flavor characteristics we enjoy from various brands and distilleries. The type of warehouse, it’s humidity, where the barrels are placed and about a hundred other variables contribute to the “alchemy” of aging a bourbon to maturity. Master Distillers rely on their expertise to manipulate the aging conditions to transform that white dog into liquid gold.

Who says that a little magic isn’t part of the equation?

If you are REALLY wanting some heady reading check out this article from Chromatographyonline.com. 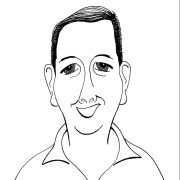 Andy is a native of the great state of Oregon – home to fantastic beers, world-class Pinots and a thriving micro distillery industry. He spends much of his time running a small graphic design/web development business but when not working his passions include outdoor cooking, volunteering with the Mt. Hood Kiwanis Camp for children with disabilities, and of course, bourbon. He regularly hosts whisky appreciation events and is enthusiastic about spreading the bourbon gospel. His love of bourbon often leads to bottle chases and the occasional stalking of local liquor stores, but successful finds are always opened and shared with friends.