Bourbon, Music, Food, Panel Discussions, and People Watching - what a great way to spend the final three days of the lunar summer. The third annual Bourbon and Beyond, the second of three music festivals in the Louisville TriFesta series produced by Danny Wimmer Presents, was a resounding success.

I was fortunate to make it out to the grounds of the Kentucky Exposition Center for portions of all three days of Bourbon & Beyond, and the incredible atmosphere did not disappoint. Each day was filled with non-stop action from the time the gates opened at 11:00 a.m. until the time the headliners exited the stage following their encore performances. The overlapping schedule of activities was such that it was physically impossible for one person to attend every event taking place concurrently. However, this format did allow for one to enjoy snippets of just about everything. What follows is a recap of my personal experience - keeping in mind I could not and did not make it to every offering. By no means am I a schooled musician but I do have an appreciation for most genres and lyrical prose. Friday started with great, pre-noon acts like Pearl and Amythyst Kiah and concluded with Dave Grohl and the Foo Fighters; three concert stages allowed for near continuous musical performances. Unfortunately, my day job prevented me from arriving at the festival before 4:00 p.m. forcing me to miss out on great acts like The Po Ramblin’ Boys and Mipso. However, I was able to arrive in time to establish a prime viewing spot for GreenSky Bluegrass; and man, they did not disappoint! John Fogarty followed by the Foo Fighters rounded out Day 1.

Saturday’s music scene kicked off with Kentucky’s own Ben Sollee. A cellist by training, Sollee’s blend of folk, bluegrass, R&B, and jazz creates a truly enjoyable style of music. Without a doubt, the best surprise of the day came when Dave Grohl returned the the stage to bang on the drums for Squeeze on their classic hit “Black Coffee in Bed.” Wow! The early evening acts, not to be outdone, featured two of the most talented women in music: Grace Potter followed by Allison Krause. Both women absolutely captivated their respective crowds with their smooth melodic voices. Hall and Oates, number-one selling duo in music history, were up next. Opening with Maneater was not what I expected, but still great to hear live nonetheless. Capping off a remarkable Day 2 was the legendary Robert Plant & the Sensational Space Shifters. It was truly aweing to watch, in person, a musical icon. Sunday proved difficult for me to get to the Exhibition Center for any of the daytime acts which is unfortunate because I know I missed some remarkable talent. However, the three acts to close out the weekend made fighting the traffic and parking congestion well worth the effort. The ever impressive Leon Bridges, the ageless ZZ Top (50th anniversary) and the highly talented Zac Brown Band, complete with a cover of ‘Sabotage’ by the Beastie Boys, sent the crowd home highly satisfied.

For me, one of the great aspects of the weekend was that it was more than just a music festival. I gained a lot of information from attending several of the panel discussions, all of which were related to the bourbon industry. Once again, attending every talk, demonstration, and exhibition was mission impossible for just one person. Many of the panels were moderated by author and bourbon expert Fred Minnick.

Bourbon Story Time was 50 minutes of light-hearted banter between Bill Samuels of Maker’s Mark fame and Tom and Mike Sherman, owners of Vendome Copper. Bill, Tom and Mike discussed the state Vendome within the bourbon industry.. As one might imagine, there is quite the demand for copper stills as micro distilleries are cropping up all over the country; not to mention, the required upkeep, maintenance, and replacement of stills that have been around for decades. For example, Blackened, in partnership with Metallica, will blast some of the band’s during the aging process with the idea that the ultrasonic waves will help the liquid penetrate deeper into the oak allowing for greater interaction with the vanillin compounds in the wood. I, like many, initially thought this was another gimmick in the world of whiskey marketing until Wes Henderson endorsed the process, saying he liked “anything that helps the whiskey interact more with the barrel - anything helping it push past the red-line.” I’m glad it gave it a try! I’m pretty sure Wes knows of what he speaks. Whiskey’s Dark Past was an interesting panel discussion lead by Brian Haara (@sippncorn). This topic delved into the seedier side of brown water’s past. Murders, bootleggers, and nefarious characters were covered by Chirs Morris (Master Distiller at Woodford Reserve), Bernie Lubbers (Brand Ambassador for Heaven Hill), and Susan Reigler (author and industry expert). The 50-minute talk was highly entertaining and informative with plenty of anecdotes to keep the audience enthralled.

The last bourbon workshop I was able to attend was held on Sunday, and it was truly one of the more interesting discussions of the weekend. Slavery in American Whiskey was moderated by Minnick, and the panelists included: Fawn Weaver (founder of Uncle Nearest), Andrea Meriweather (bourbon tourism consultant), Clay Risen (editor for the New York Times), and the legendary Bourbon Hall of Famer, Freddie Johnson (Buffalo Trace). The panel highlighted the NUMEROUS contributions to the whiskey industry from enslaved African Americans. Most noteworthy were the works done by a slave named Nearest Green. Green was one of the slaves of Jack Daniel and as the story goes, Nearest taught Daniel the distillation process that would become the standard for Jack Daniel’s Tennessee Whiskey. The Lincoln County process is the act of charcoal filtering the distillate before being entered into the barrel for aging. The open discussion of slavery in America can often be an elephant in the room; however, Weaver encouraged open and honest conversation and suggested audience members not brush it aside but to look at it through an honest lense. While the panel discussed the topic and told stories, audience members were given pours of Uncle Nearest Premium Whiskey to sample while they listened. I encourage Bourbon & Banter readers to take the time to read up on the history of Uncle Nearest; it was fascinating.

My final bourbon experience for the weekend was a great sit down with Michael Myers of Distillery 291 out of Colorado Springs, Colorado. Two years ago, fellow B&B Sr. Contributor  Brett Atlas wrote a great piece on Myers, and I was able to check in with Whiskey 291 to see how the company has grown since the article first ran. Our meeting took place over a pour of 291 Single Barrel Colorado Rye Whiskey. While talking with Myers, I learned the distillery is in the process of building a larger 14,000 sq.ft. warehouse in order to allow for increased production on the distillery line. Myers, and 291’s 13 employees, have their collective eye on creating whiskey that will be allowed to age for five or more years. In sipping the whiskey, I could most certainly pick up a hint of the smoky wood that is used to enhance the character of the rye malt mash bill. In a nod to the ubiquitous tree found in Colorado, Whiskey 291 finishes the distillate with toasted aspen staves giving it a unique Rocky Mountain approach. Having lived in Durango, Colorado for four years, I must say it was a welcomed sensory recall. 291 is clearly not trying to be a Kentucky whiskey and Meyers is hanging his hat on the proud fact that he is producing a western whiskey.

The Better in the Bluegrass stage was the site of the weekend’s culinary exhibits. Louisivlle’s own Edward Lee kicked off the weekend with a cooking demo that incorporated the idea of ‘farm to table.’ Saturday saw Zach Morris’s old flame, Tiffani Thiessen (Saved by the Bell) show off her culinary prowess followed by a book signing of her latest cookbook, Pull Up A Chair. Chefs Justin Sutherland and Rusty Hamlin also presented mouthwatering bourbon based cooking ideas. Throughout the weekend, attendees, over 91,000 in all, were never far from the option of grabbing a tasty meal and thirst quenching libation. Many of Kentucky’s distilleries and craft breweries had bars set up with signature cocktails available. Food menus around the grounds highlighted the state’s rich culinary history with offerings that celebrate Kentucky’s rich southern cuisine.

All in all, I had a tremendous time at Bourbon and Beyond produced by Danny Wimmer Presents and look forward to the prospects of being asked to represent Bourbon & Banter at next year’s iteration of the festival. 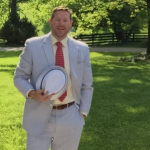 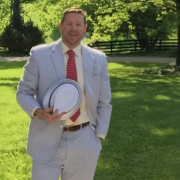