If you’re like me, you’re always looking for an excuse to pop open a bottle of Woodford Reserve and enjoy a smooth glass. While I personally believe my beloved Kentucky bourbon tastes best neat, I’m also the kind of person that loves to experiment in the kitchen. And with fall currently in full force, it’s been a huge inspiration behind some of my drink choices lately.

I’ve tried countless fall cocktails over the years – some good, some not so good. If you haven’t been mixing drinks with apple, cinnamon, or chocolate lately (yes, chocolate!), here are a few delicious concoctions to get you off to a good start. Hot chocolate is great any time of the year, but now that colder nights are rolling in, it’s especially welcome. This might not be the most creative recipe in the world, but spiking your hot chocolate with a bit of bourbon can take the warmth to a new level. The hot chocolate can be made from scratch or store-bought, it doesn’t really matter. What matters is that you’re pairing two of the most delicious tastes out there – bourbon and chocolate. I know Pops gets where I’m coming from.

If you want to experiment a little further, I recently tried this maple-orange variation and I’m a huge fan. Cori George, the woman behind the mug, combines the usual ingredients with a splash of Cointreau and maple syrup, giving the drink a tasty autumn appeal.

Optional (for those who want to try the variation I mentioned) Apple cider is arguably the most popular drink of the holiday season. To be honest, I don’t think I’ve ever met someone who doesn’t like it. It’s the perfect tableside drink for dinners and holiday parties, but it’s even better when it’s used as a base to create an apple-flavored bourbon cocktail.

There are plenty of ways to get creative with apple cider and bourbon, but the Apple Sauced recipe by Spencer Spellman does it perfectly, in my opinion. Using a hard cider instead of the usual Martinelli’s, this drink is pretty much entirely alcohol, with the exception of a small touch of maple syrup and lemon juice. My girlfriend first discovered this drink about two years ago. We tried it and loved it, and we’ve made it each time the holidays roll around since then.

This drink is typically served on the rocks, but here’s another idea if you’re planning to make these for a party: try it frozen. I know it might sound crazy, but hear me out. Last year, we threw a Thanksgiving party at our place. We wanted to have some good drinks on hand, but we knew there were going to be a decent amount of people there, so we didn’t want to have to spend all night making drinks for everyone (sorry family!). Instead, we took this recipe, scaled it up in size, threw it in our fancy cocktail blender from Margaritaville

, and the drinks were a total hit. The taste obviously wasn’t as defined as if it was served on the rocks, but it was still a winner as far as my guests were concerned. Root of All Fall

Some cocktails are so complex that there’s too much going on and you can’t appreciate their blend of flavors. Other times, complexity can be measured just right, introducing you to a world of flavor your taste buds have never experienced. This recipe is an example of the latter. The name “Root of All Fall” could not be any more appropriate – the drink takes just about every fall flavoring you can imagine and combines it together for some serious seasonal appreciation.

At first, the thought of fig jam had me hesitant on trying this drink. I’m not typically a fan of fig on its own. But I have to admit, it goes wonderfully with the additional flavors from the recipe (plus, there’s really not that much of it in there). If you’re not big on fig either, give it a try – I promise you won’t be disappointed.

Since this recipe is a more careful mix than the previous two recipes, I’m going to give exact amounts of each ingredient to yield a single drink.

Although the temperatures might be decreasing, we can keep warm through regular servings of fall bourbon cocktails. Whether you’re upgrading your favorite seasonal drinks with a bit of bourbon, or you’re upgrading your favorite bourbon drinks with a bit of season, the result is the same – you get to enjoy the holiday months with the most tasteful beverages. 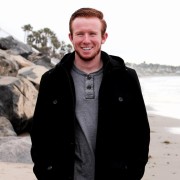 Cory Mercer is a cocktail lover from Southern California, and although you can find any kind of bar in LA, he prefers those with whiskey focus. He first came to appreciate bourbon thanks to his father and a bottle of Blanton's on his 21st birthday, and since then, he's experimented with numerous bourbons and countless cocktails. When he's not in the kitchen making experiments of his own, you can find him online scouring the web for new delicious concoctions.