Distiller’s Reserve Bottled-in-Bond Rye Whiskey is aged a minimum of four years in new, charred American White Oak barrels after being distilled onsite at KO Distilling by Ryan Hendricks in one distilling season.  It is handcrafted from 100% Virginia-grown rye, and bottled at 100 proof.

WORTH THE PRICE: $75 for a 4-year-old rye whiskey is pushing it. It’s a craft release and you would expect this to be a little more expensive, but this may be above the limit for most.

BOTTLE, BAR OR BUST: Try this in a bar or at the distillery tasting room before spending the money. While it is a good rye whiskey, the price may not work for some.

OVERALL: This is a very good and interesting rye whiskey. Interesting because of the orange vanilla notes mixed with the rye spice. Creamy on the front of the tongue with the rye spice coming through on the back. It is very enjoyable. This is the second KO Distiller’s Reserve release as earlier in the year, KO released a Bottled in Bond Bourbon. (see my review here). These Bottled in Bond releases demonstrate that there are more good things to come from KO Distilling. While the price is a little high, the quality is there. This release is one of two whiskeys released to celebrate KO Distilling's 6 year birthday. Distribution is limited right now to Virginia, DC, Maryland and Delaware,

SHARE WITH: Any fan of Rye that is looking to try something new.

WORTH THE PRICE: Not for me but I’m also someone that would choose a bourbon over a rye pretty much every time. This is a 100% Rye product. There are not a ton of 100% Ryes out there. Partly because it is difficult to make due to the fact that it creates additional issues during the distillation process.

BOTTLE, BAR OR BUST: Bar – This one wasn’t my favorites of the product line that KO Distilling makes. But with that being said, I’d also like to try another one or two samples from different barrels. Especially after my experience with their Single Barrel High Rye Bourbon. Try this at a bar or the distillery if you’re in the area. Their distribution is limited to the VA/DC areas.

OVERALL: The nose had some Oak and ethanol notes, but I was only able to detect just the faintest hint of Rye which really surprised me considering this is a 100% Rye product. There was a bit of an herbal mint like sweetness as well when I really stuck my nose into my Glencairn. This Rye had a medium amber color and nice legs when I swirled it in my glass. I still couldn’t pick up a strong Rye flavor or spice on my palate, but I did get a ton of mint like flavors. The best way to describe it would be menthol. I noticed a cool menthol like feeling in my mouth after drinking this. My whole mouth felt like I had just finished a wintergreen mint and chased it with a shot glass of ice-cold water. Since it was a bottled in bond product, there wasn’t a big finish or much of a KY hug in my chest, but the menthol “tingle” did linger in my mouth for about 30 seconds.

Four centuries ago, the first American whiskey was distilled in Virginia, giving birth to a new industry which has endured against unfathomable odds. That spirit of perseverance, distilled through 400 years of craft, is proudly presented as the Distiller’s Reserve Bottled-in-Bond expressions.

TASTING NOTES
Distiller’s Reserve Bottled-in-Bond Rye whiskey shows notes of peppercorn, apricot, and caramel apple on the nose. Honeysuckle, vanilla, and freshly mown hay on the palate are followed by a lingering finish of sweet mint and black pepper.

Building on the success of its first Bottled-in-Bond release and the popularity of American rye whiskey, KO Distilling announced the release of two new additions to its award-winning portfolio of American Whiskeys: Distiller’s Reserve Bottled-in-Bond Rye Whiskey and Bare Knuckle High Rye Bourbon.

As recently reported by Shanken News Daily, American rye whiskey has recently been among the hottest areas of the drinks market, fueling growth to nearly 1.26 million 9-liter cases in annual depletions last year—nearly doubling its total since 2015.

Bare Knuckle High Rye Bourbon is made from 75% Corn, 21% Rye, 4% Wheat and was sourced from Indiana six years ago, when KO Distilling was founded. At that time, it was put into charred new American Oak barrels and has been aging in KO’s Manassas warehouse. In keeping with the Bare Knuckle brand, which honors historic fighting figures, this six year old Bare Knuckle High Rye Bourbon features International Boxing Hall of Famer Joe “Old Master” Gans – the first 20th century African-American World Boxing Champion and the World Lightweight Champion from 1902–1908. It will be offered in both single barrel and cask strengths.

“At KO Distilling, we take great pride in crafting spirits that reflect the perseverance that makes this country great,” said Co-Founder and CEO Bill Karlson. “Every bottle is a result of our careful approach to distilling, which combines state-of-the-art equipment with the skills of our production team to produce the best of American spirits. We’re thrilled to raise a glass and welcome these two new additions to our portfolio.”

KO Distiller’s Reserve Rye Whiskey and Bare Knuckle High Rye expressions will be initially available in Virginia, DC, Maryland and Delaware in early September. They will also be available online for shipments, where legal.

Disclaimer: KO Distilling provided Bourbon & Banter with a sample of their product for this review. We appreciate their willingness to allow us to review their products with no strings attached. Thank you.
ABOUT THE AUTHOR 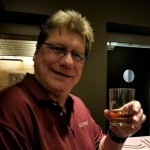 Lee’s bourbon journey started with one mistaken gulp of bourbon and coke as an eight-year-old. While bourbon was always part of his life, Lee followed a beer, wine path for the most part until a bartender poured him a taste of Buffalo Trace about ten years ago. It was at that point Lee’s love of bourbon really took off. Not only does Lee enjoy a good pour of bourbon but he is more than willing and excited to talk about it. Lee believes that bourbon, and for that matter all spirits, is enhanced by the experience of good company, good conversation and good bars. The combination leads to great stories. Say hi to him when you see him. Lee lives in Leesburg, VA, with his wife, best friend, and drinking partner, Patti. You might find her having a bourbon as well. Both Lee and Patti like to read mystery thrillers and travel. Most likely the travel leads to visits to new bars. Read Lee's full profile. 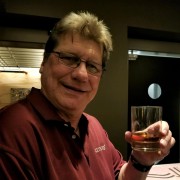